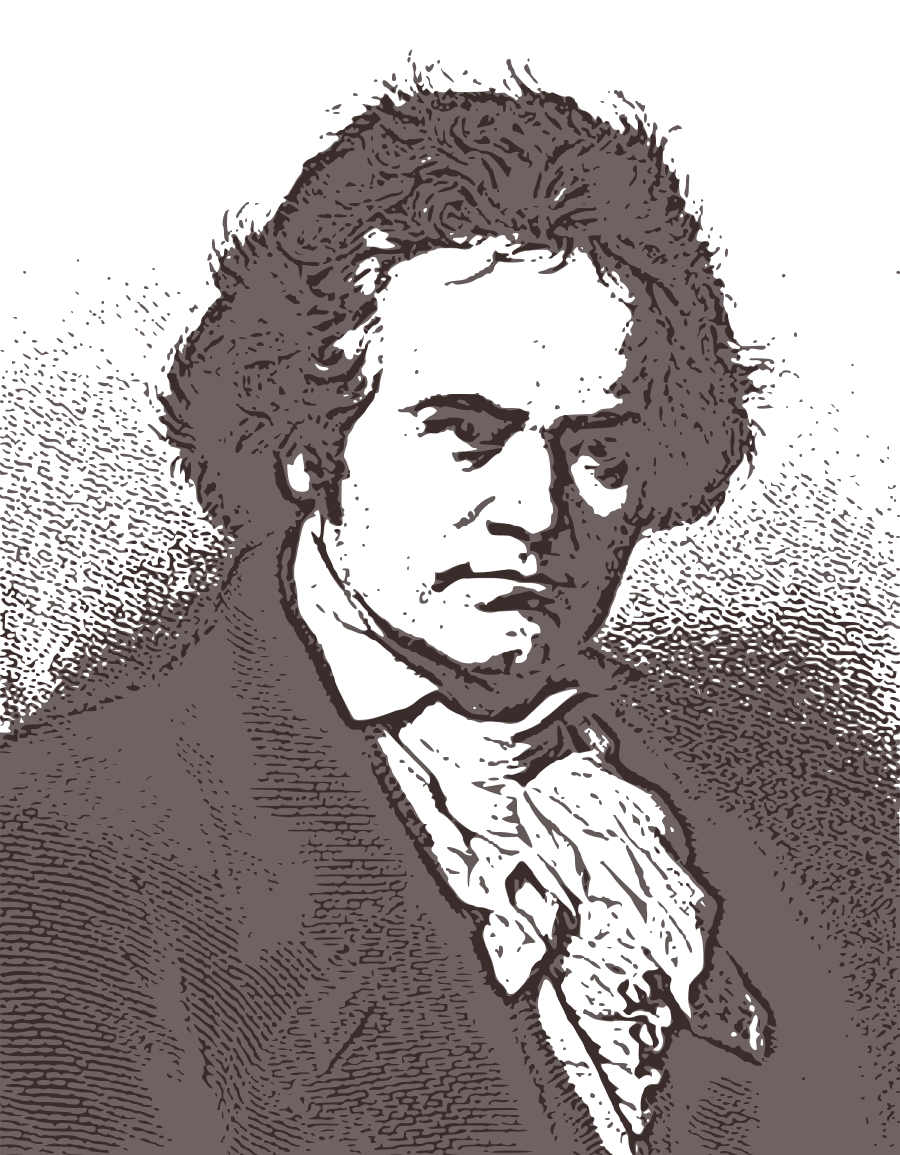 Ludwig Van Beethoven was born in Bonn, Germany in December 1770 (Debated and noted that his baptism was on that date)

Ludwig Van Beethoven (16 December 1770–26 (Debated and noted that his baptism was on that date) March 1827), whose name has varied in spelling, including Beithoffen, Biethofen, Biethoven, Bethoven, Betthoven, and Bethof (Champlin, 1893), was born in Bonn, Germany. According to Baker (1919), Beethoven represents the “full maturity (in emotional scope, in formal construction, and in instrumental treatment)” of classic forms, such as the pianoforte-sonata, pianoforte-concerto, string-quartet, and orchestral symphony. By combining tradition, exploration, and self-expression, this German composer and pianist had arguably become one of the most dominant musical figures of the 19th century (Kerman et al., 2001).

Beethoven’s Growth as a Musician: Major Influences and Figures

While Beethoven began his training from an early age, initially receiving instruction from his father (Johann van Beethoven), Van den Eeden, Tobias Friedrich Pfeiffer, Christian Gottlob Neefe, and Franz Ries, his early works had been few and seemingly unimportant compared to other great composers (Champlin, 1893; Kerman et al., 2001). It was not until he reached the age of twenty-two, that Beethoven began to win his renown (Champlin, 1893). Upon his arrival in Vienna, Beethoven proceeded with his studies, eventually taking instruction from Wolfgang Amadeus Mozart, Franz Joseph Hadyn, Johann Baptist Schenk, Johann Georg Albrechtsberger, and Ignaz Schuppanzigh (Champlin, 1893). By the conclusion of his studies, Beethoven was versed in piano, violin, viola, thoroughbass, Italian vocal composition, and quartet writing (Champlin, 1893; Kerman et al., 2001).

Notably, his early works and achievements “show him to be extending the Viennese Classical tradition,” partly due to the influences of his instructors (Kerman et al., 2001). It was during the ‘middle period’ of his career that the Waldstein and Apassionata sonatas, the Third Symphony, the Fifth Symphony, and a single opera, Fidelio, were conceived (Kerman et al., 2001; Classic FM, 2021). It would not be until the end of his career, as well as the end of his life, that he would write “his most sublime and profound works” (Kerman et al., 2001). Such works include his Ninth Symphony, the ‘Choral’ from 1824, and his ‘Late Quartets’ from 1825 (Classic FM, 2021).

Intriguingly, Beethoven did not possess the capabilities, or facility, for rapid invention (Baker, 1919). Rather, he seemed to rejoice in the solidity of production and revisions, accumulating a number of ‘sketch-books’ and drafts, each filled with fragments, motives, themes, ideas, and tentative notations (Baker, 1919). It has been noted that Beethoven “was in the habit of working on several compositions at a time” and that “he composed very slowly” (Champlin, 1893). It is extremely plausible that each piece was written and rewritten until satisfaction was met, although some commissions did not appear to have ever reached performance (Champlin, 1893; Kerman et al., 2001).

In spite of, or perhaps due to his personal afflictions, including ill health, family circumstances, poverty, and increasing deafness (i.e. tinnitus) (Champlin, 1893; Classic FM, 2021), Beethoven “began to compose in an increasingly individual musical style” (Kerman et al., 2001). Plagued by a myriad of diseases and conditions, it has often been assumed that Beethoven also suffered from cardiac arrhythmias (Goldberger et al., 2014; Kerman et al., 2001; Classic FM, 2021). Asserted by musicologists, historians, physicians, and writers (e.g. Cheng 1997; Kappenberger 1986; Luderitz 1995; Vaisrub 1980) evidence of this disease is manifested by abnormal (i.e. irregular) rhythms in many of his compositions (Goldberger et al., 2014). While such claims remain speculative, it is feasible that Beethoven reflected his physical sensations in his compositions, ultimately creating “musical electrocardiograms” that evoke “a sensation of shortness of breath” and “intense emotion” (Biss, 2011; Goldberger et al., 2014).

As was common in Bonn, Germany at the time, few children would continue their education, done so by moving from elementary school to a Gymnasium (i.e. high school) (Kerman et al., 2001). Specifically for Beethoven, this was not the case. His general education was not only brief, but also lacking, as observed in some of the “gaps in his academic equipment” (Kerman et al., 2001). Most noticeably, Beethoven was ignorant of orthography, punctuation, and mathematics (e.g. multiplication) (Kerman et al., 2001). This, however, could be explained by his severe devotion to music, which likely devoured his hours outside of traditional schooling (Kerman et al., 2001). Fortunately, Beethoven was taught a bit of Latin while attending public school (Champlin, 1893). It would not be until much later that Beethoven fully cultivated his taste for language, eventually taking interest in both German and English literature (Champlin 1893; Baker, 1919).

As Beethoven’s career began, he took a variety of positions, both paid and unpaid. In 1783, Beethoven was “appointed cembalist in the orchestra without salary” (Champlin, 1893). Only a year later, he was “appointed second organist, with a salary of 150 florins (about $63.30)” (Champlin, 1893). In 1788, his family’s fortune and circumstances were strikingly in decline (Kerman et al., 2001). After a series of difficulties, along with the death of his mother, Beethoven witnessed his father “become a confirmed drunkard” (Champlin, 1893), whose “capacity as breadwinner” (Kerman et al., 2001) was severely reduced. By 1789, Beethoven had placed himself as the head of the family, “petitioning for half his father’s salary to enable him to support his brothers” (Kerman et al., 2001). Once his allowance was stopped, Beethoven “was dependent wholly upon his own resources” (Champlin, 1893). To further supplement his income, Beethoven took on a number of aristocratic pupils, including Archduke Rudolf of Austria and Countess Giulietta Guicciardi (British Library). Teaching piano lessons would become a significant element in the early stages of his career, especially given that his increasing deafness forced Beethoven to “stop playing the piano in public in 1814” (British Library).

Perhaps, provided the historical backdrop, Beethoven’s compositions can also be identified or interpreted “in relation to the wider cultural and political landscape of early 19th century Europe” (British Library). Moreso, Beethoven’s music corresponds with transcendentalism, the sublime, notions of struggle, revolution (e.g. the French Revolution and Napoleonic Wars), ideals of freedom, and the emancipation from tyranny (British Library). To this day, “Beethoven’s power to stimulate and provoke” has resulted in the appropriation of his music “by diverse political and social movements” (British Library).

Seemingly, Beethoven’s successes were, in part, owed to his constant circle of amateurs and patrons (Champlin, 1893). Certainly, “no matter what strictures critics and contemporary composers might make on his music,” Beethoven never lacked admirers (Champlin, 1893). Interestingly, this was despite his attitudes and social behavior. As described by Ferdinand Ries, a friend and pupil of Beethoven, aspects of the brilliant composer were rather baffling. It was observed that Beethoven had an “unwillingness, or inability, to conform to the normal conventions of social punctilio,” which “hardened in later life into a stance in which he felt himself a prince of art and entitled to behave as one” (Kerman et al., 2001). Regardless, his whims, restlessness, brusque manners, as well as the total disregard for conventionalities and social interchange, were all tolerated by the public (Champlin, 1893). Although Beethoven never held any permanent or official positions, he was rather well off, in regards to material wealth, during his time in Vienna (Champlin, 1893). Particularly, he was provided sums from publishers, as well as yearly allowances from many of his noble patrons (Champlin, 1893).

His father and grandfather belonged to the ‘band’ at Electorate of Cologne. The place of his birth was known as ‘515 in the Bonngassc’, now known as ‘Beethoven House’.

At four years old, Beethoven began studying music with Johann, his father, who taught him to play on the violin and keyboard. In 1779, as his adroitness boosted beyond his father’s knowledge, he started learning irregularly from Bonn opera tenor Tobias Friedrich Pfeiffer and soon became a pupil in organ to Van den Eeden of the Court Chapel. In 1781, moved to the successor of Eeden, Gottlob Neefe. Neefe had helped Beethoven to become the ‘Cembalist’ or keyboard player to the orchestra, which was essentially a conductor’s position, full of responsibilities including accompanying the orchestra in rehearsals. Neefe suggested that Beethoven ‘would be the next Mozart’. Beethoven replaced Neefe as the organist.In 1785 young Ludwig began studying violin with the father of composer Ferdinand Reis – Franz Reis.Two years later, Beethoven traveled to Vienna where his true journey began as he made the acquaintance of Mozart, who provided him with some lessons, and Emperor Joseph. Mozart was dazzled by Ludwig, who performed an unprepared piece on a theme given to him on-the-spot eloquently. For four years, starting in 1788, Beethoven played the viola and organ in the national theater orchestra and opera. Beethoven permanently settled in Vienna where he studied with Haydn. While Haydn left to England (1794), Beethoven studied with other masters and spent some time with Salieri. And short years later, were the first signs of his hearing problems. Until 1813, he gradually reduced conducting and performing in public – ashamed of his secret. A viola piece exists that is sometimes labeled as composed or arranged by Beethoven. But Beethoven denies having arranged it, and it was originally the Serenade in D op. 8, for violin viola and cello. Nonetheless this, fairly large piece is worth your time: the Nocturne (Notturno) for viola in D op. 42:

The compiled music dedicated to him is made up of piano and orchestra music by giants such as Carl Czerny, Ferdinand Reis, and Franz Schubert.

Beethoven arranged Mozart’s Clarinet Quintet in A K.581 for solo piano, and had written multiple cadenzas for his 20th piano concerto k466.

Furthering the grandeur of Beethoven is the fact that his music was used in scores of collections compiled by top composers for varying purposes. Some of these musicians are Friedrich Seitz, Alfred Moffat, Willy Burmester, Moritz Moszkowski, C.V. Alkan, and Hans Sitt.

Luderitz, B. (1995). History of the Disorders of Cardiac Rhythm. New York: Futura, Armonk.