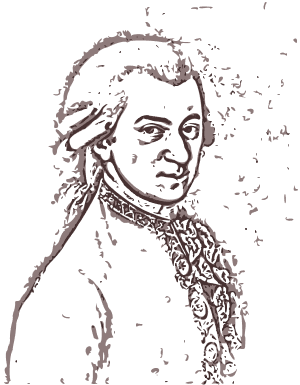 I. Mozart’s Legacy: The Composer

Wolfgang Amadeus Mozart (27 January 1756–5 December 1791), baptized as Johannes Chrysostomus Wolfgangus Theophilus Mozart, is arguably recognized across the educated world for his genius, prodigious abilities, and musical compositions (Niemetschek, 1808; Kuznetsova, 2016). During his lifetime, Mozart composed over 600 works, many of those acknowledged as the “pinnacles of symphonic, concertante, chamber, operatic, and choral music” (Kuznetsova, ibid.). Such works have been used or referenced to “elevate music from mere entertainment to a higher form of intellectual engagement,” while simultaneously developing “ethical forms of musical pleasure” (Painter, 2002, p. 186). Essentially, Mozart served as a figure and an outlet for the social and aesthetic goal of uniting work with pleasure, specifically during the 1790s to the early 1820s (Painter, ibid., p. 187). Consequently, as the social discourse (e.g. art, architecture, literature, and music) transitioned from the Baroque and Rococo period, a German bourgeois culture was formed (Kuznetsova, 2016). This, along with the emergence of musical biographies, was partly due to the concern for the general public’s “low literary taste” (Painter, 2002, p. 190). The ultimate goal was to improve society morally and intellectually, through engaging facts and the creation of a framework capable of portraying abstract or difficult topics, such as musical aesthetics (Bürkli, 1834; Painter, ibid., p. 191). Conceivably, Mozart’s works offered researchers, writers, readers, as well as listeners, instructive materials worthy of contemplation (Niemetschek, 1808.; Painter, ibid., p. 186). His image and his compositional process would later become a general example (i.e. reference) as “a generation of commentators instructed the public on new values in musical culture” (Painter, ibid., p. 160). Notably, Mozart remains one of the most prolific and enduringly popular composers from the classical era (Kuznetsova, 2016). Given that Mozart’s pieces were rather unique, they were considered radical at the time, and subsequently, they were not initially appreciated for their complexity or their extraordinary musical elements (The California Institute of Technology). Currently, however, the effects of his accomplishments in art and music, specifically in European and Western cultures, are both profound and undeniable (Kuznetsova, 2016).

II. Mozart’s Growth as a Musician: Major Influences and Figures

Born to Anna Maria Pertl and Leopold Mozart, a composer, violinist, and concertmaster, W. A. Mozart’s sense of pitch was quick to manifest, as he sought to play “upon the keys of the pianoforte” at the mere age of three (Thomas et al., 1901, p. 270). At the age of four, he had clearly conceived and written a pianoforte concerto, but not without some difficulty (Thomas et al., ibid.). By the age of five, Mozart had begun composing minuets on the harpsichord that were “natural but correct harmony, melodious and even characteristic” (Thomas et al., ibid.; Fuller-Maitland et al., 1910, p. 284; The California Institute of Technology). Strikingly, it was not until the age of ten that Mozart could “endure the sound or sight of the trumpet” (Thomas et al., ibid.). Mozart would later work at the violin, so as to please and/or appease his father, “who had a high opinion of his ability in this direction” (Thomas et al., ibid., p. 275). Undoubtedly, it was Mozart’s eagerness to learn anything, perhaps stirred on by his docility and his adoration for his father, that kept him in a child-like disposition (Fuller-Maitland et al., 1910, p. 284). Ironically, Mozart was disinclined to “ordinary childish amusements” and “would not stand a joke from any one” (Fuller-Maitland et al., ibid., p. 284-285). It was this seriousness, along with his earnestness towards his music lessons, that Mozart seemingly disregarded his youth and progressed rapidly (Fuller-Maitland et al., ibid., p. 285). Within the following decade or so, Mozart and his family would be exposed to a number of musical conditions in a number of cities, including Munich (1762), Vienna (1762 and 1767), Ludwigsburg (1763), Frankfort (1763), Bonn (1763), Brussels (1763), Paris (1763 and 1778), London (1764), and Italy (e.g. Roveredo, Verona, Milan, and Naples) (1769) (Thomas et al., ibid., p. 272-274). Of the many opportunities afforded to Mozart, he listened to Italian opera, Handel’s oratorios, the castrate Tenducci, and the Allegri Miserere (Thomas et al., ibid., p. 273-274). Aside from this, Mozart also took vocal lessons under the famous male soprano, Manzuoli, set to learning Latin, and became increasingly intimate with Christian Bach (Thomas et al., ibid., p. 273). Despite battling a number of illnesses during these travels, including the scarlet fever and smallpox, Mozart did manage to benefit his education, while also finding inspiration for his future works (Thomas et al., ibid., p. 273). His proneness to illness, however, would affect his meeting other influential figures later in life, including Ludwig van Beethoven. Ludwig van Beethoven, a fellow musical prodigy, arrived in Vienna during 1787 with the aspirations of gaining entry into Mozart’s home to take lessons from, who Beethoven believed to be, the greatest living composer (Classic FM, 2018). While Mozart’s health placed him in no mood to receive Beethoven, he eventually agreed to take him on as his pupil (Classic FM, ibid.). Unfortunately, Beethoven would never receive the opportunity to fulfill his ambitions, as “his mother was seriously ill with consumption” and he was inevitably forced to leave for Bonn (Classic FM, ibid.). Upon Beethoven’s return to Vienna, during 1792, Mozart had already passed (Classic FM, ibid.). Many later publications by Beethoven, unsurprisingly, include variations of the aria 'Ein Mädchen oder Weibchen' and the aria Papageno's 'Bei Männern, welche Liebe fühlen' from Mozart’s The Magic Flute (Classic FM, ibid.).

﻿﻿Frightfully, Mozart’s career as a composer was heavily swayed by his changing life circumstances, observed in his precarious social positions, social status, and financial problems (Kuznetsova, 2016). Oftentimes, Mozart’s travels with his family were difficult, as traveling conditions were either limited or primitive (Kuznetsova, ibid.). Generally, the family was forced to “wait for invitations and reimbursement from the nobility” (Kuznetsova, ibid.). Consequently, Mozart’s artistic successes were determined by moments of fortune, favor, and friendship (Kuznetsova, ibid.). This is apparent when comparing Mozart’s works and social popularity from the 1770s and from the 1790s. Between 1773 and 1777, Mozart found himself employed at the Salzburg Court as a court musician (Kuznetsova, ibid.). It was during this period that Mozart developed an enthusiasm for violin concertos, producing a series of five: K. 207, K. 211, K. 216, K. 218, and K. 219 (Kuznetsova, ibid.). The latter three, incredibly, are now “staples of the repertoire” (Kuznetsova, ibid.). Yet, during the late 1790, Mozart’s situation gradually declined as his popularity in Vienna also declined (The California Institute of Technology). Additionally, Mozart’s subscription concerts failed to maintain its appeal, as the number of subscribers dwindled to one (ibid.). With no savings, no performance rights, and no copyright laws, Mozart’s income was certainly limited, especially given that the “Composer [was] paid only for his service of physically playing or conducting what he composed” (ibid.).