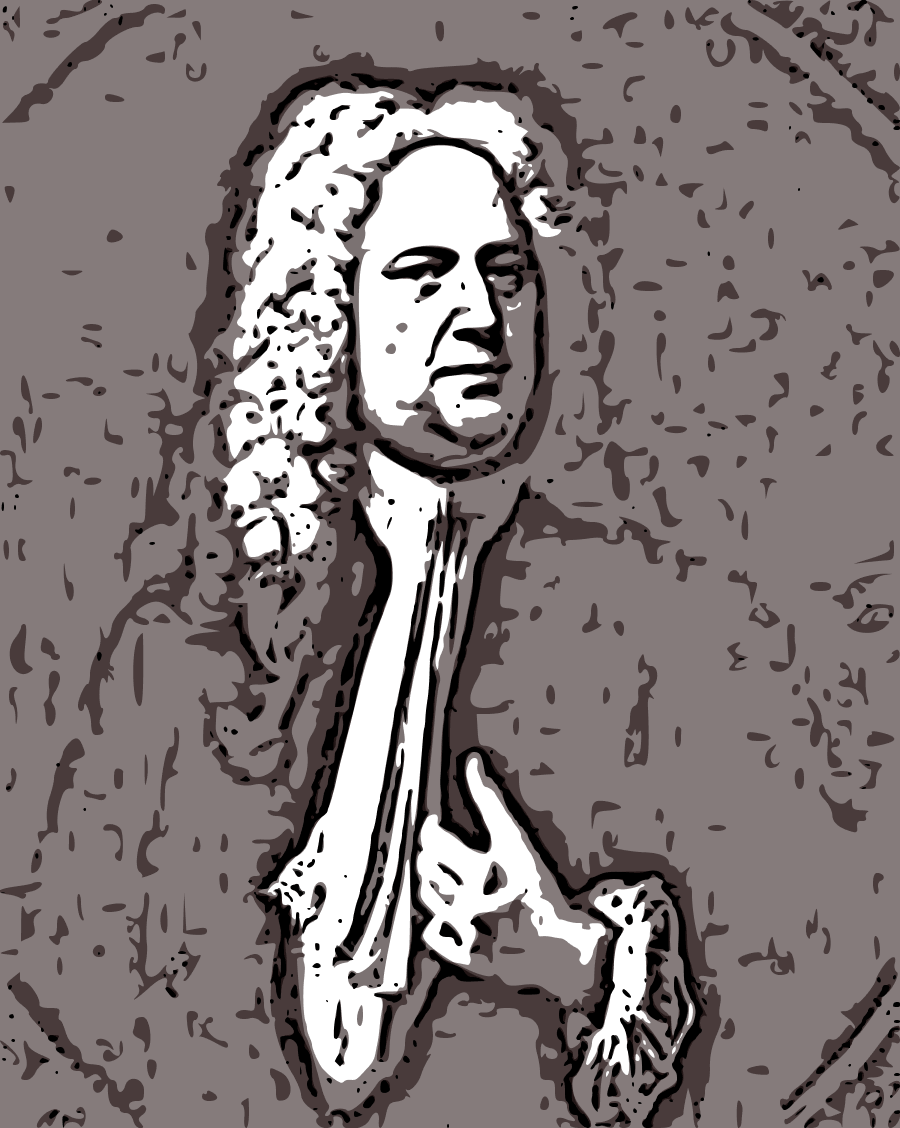 George Frideric Handel (23 February 1685–14 April 1759), also spelled Georg Friedrich Händel or Haendel, was a German-born English composer, performer, traveller, and entrepreneur (Cudworth, 2021; Vickers and Gardner, 2015). As a composer of the late Baroque era, he was most noted for his anthems, operas, oratorios, and organ concertos, particularly his “holiday-time renditions of the Messiah's 'Hallelujah' chorus or his Music for the Royal Fireworks” (Classic FM, 2021a). While he was often invited to take employment with several potential patrons, Handel seemed “hesitant to settle down until he became established in London” (Vickers and Gardner, 2015). For such reasons, perhaps stirred on by a need to acquire the status that he felt he deserved, Handel spent the bulk of his career in London (Philadelphia Chamber Music Society, 2021). Today, it is universally accepted that Handel was “ a significant contributor to the genre of oratorio” (Knowles, 2003). Arguably, it was through his personal development of the oratorio, that Handel obtained the rank and prestige “as one of the greatest composers of Western music.” Essentially, the oratorio had become “a symbol of Handel's art” (Knowles, 2003).

Although Handel lived a dramatic and productive life, writing a diverse set of works, his life was not entirely easy (Vickers and Gardner, 2015). His career had suffered the attacks of competition, seen in the rivalry between other composers and other opera houses (Cudworth, 2021). Employment was scarce, as most opera houses “could barely support even one Italian opera in addition to its English theatres” (Cudworth, 2021). His artistic endeavors were the subjects of great controversy and faced repeated criticism, which dictated that his pieces were ridiculous and profane (Vickers and Gardner, 2015). By 1737, the Italian opera company that he co-managed went bankrupt (Cudworth, 2021) and the composer could barely keep his creditors away (The Tabernacle Choir at Temple Square, 2018). Handel would eventually emerge from this misfortune, reaching the height of his powers between 1741 and 1744 (Cudworth, 2021). This was considerably unimpressive to some, as these years were in the latter stages of his life. However, he did “suffer from a stroke in 1737, was involved in a coach crash in 1750 and had cataracts and eventually went blind after a botched eye operation 1751” (Classic FM, 2021b). Feasibly, if Handel had not recovered from his stroke, which “caused both temporary paralysis in his right arm and some loss of his mental faculties” (Classic FM, 2021a), his musical career likely would have halted in its tracks. Regardless, these bouts of serious physical illness could not hinder his musical activities, which he kept “alive until the end” (Cudworth, 2021; Vickers and Gardner, 2015).

Handel’s Growth as a Musician: Major Influences and Figures

Strikingly, Handel’s birth year “was an auspicious one for baroque music,” as it also saw the birth of figures such as Domenico Scarlatti and Johann Sebastian Bach (Philharmonia Baroque Orchestra & Chorale, 2021). Handel was deeply influenced by a multitude of composers, particularly those “of the Italian Baroque and the middle-German polyphonic choral tradition” (Philadelphia Chamber Music Society, 2021). Such composers included Antonio Caldara, Alessandro Scarlatti, Arcangelo Corelli, Bernardo Pasquini, Domenico Scarlatti, Francesco Gasparini, and Giacomo Perti (Vickers and Gardner, 2015). The decade after 1732 was an especially significant time period for Handel. Combining the influences of Italian opera and English-language concerts, it was observed that “many of his finest masterpieces were composed and first performed” (Vickers and Gardner, 2015). Remarkably, this was done despite the uncertainties in public taste from 1728 to 1741. Opera in the Italian style had “went into decline for a variety of reasons, one of them being the impatience of the English with a form of entertainment in an unintelligible language sung by artists of whose morals they disapproved” (Cudworth, 2021). He would produce 40 such works before the English oratorio, consisting of “a large musical composition for solo voices, chorus, and orchestra, without acting or scenery,” was established (Cudworth, 2021). Fortunately, given the late 1960s revival of baroque music, along with an appreciation for historically informed musical performance, Handel’s operas are seeing a growing interest yet again (Philadelphia Chamber Music Society, 2021).

A barber-surgeon, Handel’s father attempted to dissuade him from pursuing the “dubious occupation” of a musician (Cudworth, 2021; Vickers and Gardner, 2015). It was evident that his father “was not a huge fan of his son's musical ambitions. In fact, when he was a boy, Handel had to sneak to the attic to play a clavichord that had been hidden up there” (Classic FM, 2021b). Unfortunately, his father would not live to see his son’s rise to fame, passing by the time Handel had turned 11 (Cudworth, 2021). However, his mother “nurtured his musical gifts,” and so his education was provided for accordingly (Cudworth, 2021; Vickers and Gardner, 2015). Handel was typically drawn to instruments, intrigued by the “sounds they could make and the feelings they could evoke” (The Tabernacle Choir at Temple Square, 2018). As a child, Handel learned the principles of keyboard performance and composition from Friedrich Wilhelm Zachow (Classic FM, 2021a). Even early on, Handel set to teaching himself to play the harpsichord and pipe organ (Philharmonia Baroque Orchestra & Chorale, 2021). He later became an organist of the Reformed (Calvinist) Cathedral (i.e., The Liebfrauenkirche) in Halle, and yet, he would only serve for a year until greater opportunities pulled him to new locations (Classic FM, 2021a; Cudworth, 2021). Handel studied law at the local university, but this was quickly abandoned as well (Vickers and Gardner, 2015).

A decent amount of time would be spent in Hambury, as Handel earned a living as a back-desk violinist and harpsichordist at the opera house (Cudworth, 2021; Vickers and Gardner, 2015). He would also premiere his first opera, Almira, before deciding to travel independently to Italy (Cudworth, 2021; Vickers and Gardner, 2015). Eventually, he would come to train in Florence, Naples, Rome, and Venice (Philharmonia Baroque Orchestra & Chorale, 2021). By 1712, Handel had settled in London (Classic FM, 2021b). This was done so, feasibly, due to the composer’s sense that “the possibility of continuing popularity and prosperity” was to be found in England (Cudworth, 2021). He became a “naturalized British subject,” founding three separate commercial opera companies to “supply the English nobility with Italian opera” (Philadelphia Chamber Music Society, 2021). Notably, he had “impressed King George early on with the Water Music of 1716, written as entertainment for a royal boat outing” (Classic FM, 2021a). His successes in London continued, as he was eventually appointed the musical director The Royal Academy of Music (Classic FM, 2021b).

Perhaps the defining piece of his portfolio, Messiah, a massive 260 page oratorio, exceeded expectations and received rave reviews (The Tabernacle Choir at Temple Square, 2018). Amazingly, this piece was produced in only 23 days, seemingly to “burst onto the stage” in Dublin (Kandell, 2009; The Tabernacle Choir at Temple Square, 2018). The attendees swelled to an outstanding record of 700 (Kandell, 2009). Such music was suitably dignified and, by today’s standards, old-fashioned (Cudworth, 2021). Rightfully so, the proceeds from its performance went directly to charity, specifically to help “prisoners, orphans and the sick” (The Tabernacle Choir at Temple Square, 2018). This piece was so well received that, during its premiere, King George II had “stood up as soon as the Hallelujah chorus kicked in” (Classic FM, 2021b). The remainder of the audience was observed to be both mesmerized and moved (Kandell, 2009).

According to Charles Burney, an English musicologist, “This great work has been heard in all parts of the kingdom with increasing reverence and delight; it has fed the hungry, clothed the naked, fostered the orphan and enriched succeeding managers of the oratorios, more than any single production in this or any other country” (quoted in The Tabernacle Choir at Temple Square, 2018). For a majority of Handel’s oratorios, the “soloists dominate and the choir sings only brief choruses” (Kandell, 2009). Alternatively, Messiah was propelled forward by the chorus “with great emotional impact and uplifting messages” (Cummings, quoted in Kandell, 2009). Given its theme, scriptural references were prevalent (The Tabernacle Choir at Temple Square, 2018).

Notably, his funeral was a huge state affair, with over 3,000 people present (Classic FM, 2021b). Certainly, the loss of this composer was a huge blow to his fans. Appropriately, Messiah was played at Handel’s burial and his estate was subsequently distributed to several charities (Philharmonia Baroque Orchestra & Chorale, 2021). While it was originally intended as an Easter-time offering (Kandell, 2009), it currently serves as the “centerpiece of the Christmas season” (Philadelphia Chamber Music Society, 2021).

The Tabernacle Choir at Temple Square (2018). George Frideric Handel: A Brief Biography of the Man and the Early Days of Messiah. The Church of Jesus Christ of Latter-day Saints.