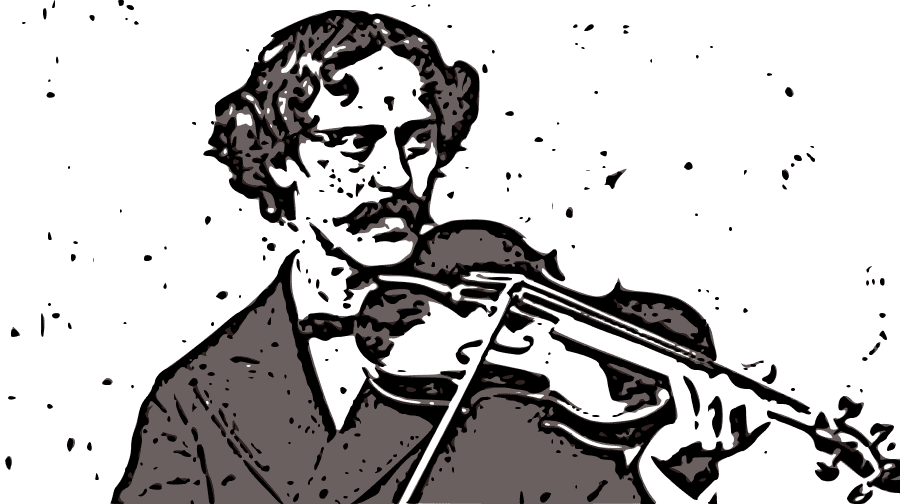 Pablo (Martin Meliton) de Sarasate, violin virtuoso of the 19th century was born in March of 1844 in Pamplona, Capital of Navarre Spain. His father and a local teacher were likely the first to teach him violin. When he was just ten years old he performed in the court of Madrid that belonged to Queen Isabelle. She had rewarded him with a Stradivarius. In the early months of 1856, when Sarasate was almost twelve years old he was accepted to the Paris Conservatory, studied solfege and participated in the class of Mr. Jean-Delphin Alard.

After a short time the conservatory awarded him the grand prize in solfege and violin competitions. Sarasate participated in the harmony class of Henri N. Reber but left to pursue a career as a virtuoso concert performer.

Pablo arrived at London in 1861 to perform on May 22nd at St. James’s Concert Hall for the first time (his debut). He also returned there to perform in 1874 at the Philharmonic Concert and at the Musician’s Union. Then again in 1877 and 1878 to perform at the Chrystal Palace and Philharmonic. Around these years Sarasate was touring many places in Europe and was loved by audiences.

We are lucky today to find recordings of Sarasate himself have been preserved, and it is one of the earliest masters of classical music and violin that we can listen to for ourselves. Multiple recordings can be searched and found of Sarasate playing his Gypsy Airs op.20 (‘Zigeunerweisen’), Introduction and Tarantelle op.43, Zapateado, Habanera, Wieniawski’s Legende op.17, Paganini Perpetual Motion op.11 (accompaniment and free sheet music), and others: https://www.amazon.com/s?k=sarasate+1904&ref=nb_sb_noss

The following were some prominent dedications to Sarasate. You will find familiar music here and find further how much he influenced classical music, as some of these became known classics and essential violin repertoire.

Rhapsodie Hongroise for violin and orchestra in op.5:

Joseph Joachim: Variations for Violin and Orchestra in E minor:

Violin Concerto in F op.20: https://imslp.org/wiki/Violin_Concerto%2C_Op.20_(Lalo%2C_%C3%89douard). The piece begins in F minor and quickly reverts to the major key.