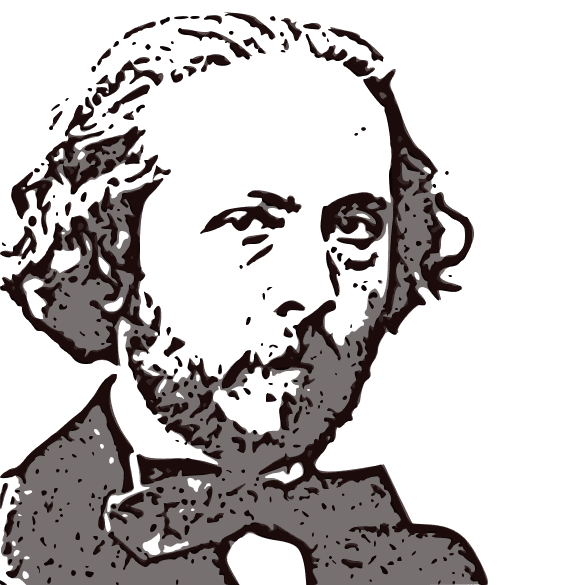 Édouard-Victoire-Antoine Lalo (27 January 1823–22 April 1892), or Édouard Lalo for short, was a French romantic composer born of Spanish descent (Britannica, 2021; Classical Net, 2021). Most noted for the clarity of his pieces, Lalo was one of the major composers of orchestral and chamber music, specifically during a time when “French musicians were dominated by an impulse to compose for the theater” (Britannica, 2021; Minderovic, 2021). Although he made an early career as a member of the string quartet, it was not until he reached the age of 50 that “he made any great impression as a composer” (Naxos Records, 2021). Seemingly, his reputation is dependent chiefly on his orchestral works, despite him having also written operas, songs, and chamber works (Naxos Records, 2021). The latter two contribute to Lalo’s earliest surviving compositions. Unfortunately, his two early symphonies were destroyed (Classical Net, 2021). Of his popular works, his Symphonie espagnole particularly “captivates the listener with its melodic charm and great passion,” (Minderovic, 2021) and is “a popular part of current violin repertoire” (Naxos Records, 2021). Meanwhile, his Cello Concerto in D minor “makes use of the instrument's expressive potential” (Minderovic, 2021). His chamber works, which were influential and generally successful, included a string quartet, cello and violin sonatas, and three piano trios (Britannica, 2021). His stage works particularly failed, as they were deemed Wagnerian and unreasonably progressive (Classical Net, 2021).

Unlike his predecessors, who engendered Romanticism and craved for revivification, self-expression, and imagination unrestrained, Lalo was among the men “called to a duty more exacting and who, in most branches of French creative activity, in music as in all others, directed their efforts to an uplift in consequence of which the national ideal was notably raised” (Tiersot and Martens, 1925). While his music does show some affinity with Carl Weber and Robert Schumann, they are by and large, “the product of a highly original talent” (Britannica, 2021). Certainly, Lalo maintained his own personality and sense of style. Impressively, he was also one of the first composers to incorporate Spanish folklore, and its dance rhythms, into his work (Chicheportiche, 2012).

Lalo’s Growth as a Musician: Major Influences and Figures

Lalo’s later rise to fame is, in some part, owed to his friendship with Spanish virtuoso violinist and composer, Pablo de Sarasate (Chicheportiche, 2012). Suggestively, Lalo was inspired to write definitively “Spanish” music by Sarasate’s “colorful” playing, as it was so different in style and combined “grace, clean-cut brilliancy, and bewildering vitality in so remarkable a degree” (Encyclopedia of the Violin, quoted in Huscher, n.d.). In an 1878 letter, Lalo went so far as to write “that his [Sarasate’s] presence in Lalo’s life had been his greatest artistic opportunity and that without him he would have continued to write insignificant odds and ends” (Chicheportiche, 2012). The two musicians, over the course of their relationship, would come to dedicate many works to each other (Huscher, n.d.). Undeniably, this friendship was invaluable to Lalo, particularly given his tendencies towards partial isolation. Within his own preoccupation, Lalo was “well aware of what he might gain through contact with the people,” but he “found it too repugnant to mingle with them” (Tiersot and Martens, 1925).

Aside from the influences of this prominent figure, Lalo was impacted by a handful of locations and cultures. Seemingly, he was “geographically restless,” as he constantly tried to compose something different while looking to French, Spanish, Russian, and Norwegian music and/or art (Huscher, n.d.). In his experimentation, Lalo would create a “curious hybrid, neither concerto nor symphony, but as a character piece it's unsurpassed” (Huscher, n.d.). Essentially, his talents developed with his studies, and yet, art and nature also played a huge part in the “genius of a master like Lalo” (Tiersot and Martens, 1925).

Brought up in a bourgeois environment, Lalo “received the suitable education” (Tiersot and Martens, 1925). Born into a military family, it is likely that music studies were considered impractical for Lalo, however, they may not have been neglected entirely. It was believed that his first lessons were provided by Baumann, a cellist who “had played in the orchestras which gave the first performances of the Beethoven Symphonies, conducted by that immortal master himself” (Tiersot and Martens, 1925). Potentially, these were the few, if not the only, lessons that Lalo absorbed fully and applied tactfully. Such lessons would have been taken trustfully and very seriously, for Lalo was “lavished advice of a technical nature” (Tiersot and Martens, 1925).

It is important to note, however, that Lalo’s father “balked at the idea of having his first born become a professional musician” (Huscher, n.d.). With the ideals of the time, a family was “dishonored when the son became an artist” (Tiersot and Martens, 1925). Nevertheless, Lalo pursued the field against his father’s will (Britannica, 2021). He would eventually leave home and flee to Paris towards the end of 1839, distinctly without funds (Britannica, 2021). Officially starting his musical career, Lalo studied violin at the Paris Conservatoire, under the guidance of the conductor François-Antoine Habeneck (Classical Net, 2021). He would also take private lessons for composition (Minderovic, 2021). Needing to support himself financially, Lalo simultaneously worked as a violinist and a teacher (Britannica, 2021; Minderovic, 2021). In 1850, Lalo would find himself becoming an important member of a movement which aimed to revive the chamber music of France (Minderovic, 2021). By 1855, he had partly founded the Armingaud Quartet (Britannica, 2021). Performing as Schubert (1808-1878), Francois their viola player, Lalo helped to promote the music of Beethoven, Haydn, Mendelssohn, Mozart, and Schumann (Minderovic, 2021). Marvelously, this quartet was sometimes “joined by high-profile pianists such as Clara Schumann and Camille Saint-Saëns” (Huscher, n.d.).

It would not be until 1866, at the age of 43, that he would return to his work, but only to be met by new misfortunes (Huscher, n.d.). Taking several years to turn his luck around, Lalo finally emerged with his Symphonie espagnole (1874), a violin concerto of “Spanish flavour” that was divided into five movements (Naxos Records, 2021). A brief description of its structure and tone is provided as follows:

“The first movement of the Symphonie espagnole is the most assertively "symphonic" of the five, particularly in the way it develops most of its material from the opening fanfare. The beginning also introduces the rhythm of a duplet followed by a triplet, and this two-plus-three (and sometimes three-plus-two) pattern lends a Spanish quality to the music. The violin enters in the fourth measure—with the fanfare motto—and is rarely silent after that. This is high-wire solo material, memorable not so much for its pyrotechnics as its genuine melodic invention and rhythmic flair. The second movement is a scherzo, colored by the same seguidilla dance rhythm that dominates Carmen's famous aria and sung like a grand serenade, with soaring violin lines over pizzicato strings and harp, like the sound of guitars in the night” (Huscher, n.d.).

Chicheportiche, A. (2012). The Performer’s Influence on Franco-Belgian Compositions from 1870 to 1930 (Doctoral dissertation).