As a rule, a chin rest is fastened to the lower left side of the violin, the old and im­practicable appliances of former times having given away to the admirable Becker Chin and Shoulder Rest, which enables a player to hold the violin in a correct and horizontal position, through a light pressure of the chin upon the plate of the chin rest, and consequently, without the aid of the left hand. In this way the greatest freedom is given to the left hand, allowing it to proceed into the highest positions without any additional exertion for the support of the violin. With the aid of this Chin and Shoulder Rest the positions can be readily exchanged, without disturbing or changing the position of the violin, which in turn will affect the purity of intonation most favorably. Another advantage of this Chin and Shoulder Rest consists of its being fastened at the extreme edge of the ribs, and that it comes in contact with neither the top nor back of the instrument; inconsequence, the breadth and volume of tone are not diminished through pressure of the chin. This is still another proof of its superiority above other chin rests; in short, the Becker Chin and Shoulder Rest may be declared as a most important invention for the aid of modern virtuosity. (See illustration II)

In accordance with the old and well-known rules of Louis Spohr and other celebrated classic masters, the violin:

(1) Should be held in such a manner that the strings, from the bridge to the saddle, will appear in a perfectly level or horizontal direction.(See illustrations I and II)

(2) Should not lie held exactly straight, but so far to the left that the scroll will come nearly opposite the left shoulder (See illustration V)

(3) Should point towards the right to such an extent that the bow can cross the strings easily to its tip at right angles. This inclination toward the right probably amounts to an angle of 45 degrees (just between a perpendicular and a horizontal position). (See illustrations I, II, III, IV, V)

(4) With this position of the violin and in bowing upon the 14 string, the right elbow presses against the body. (See illustrations I and III)

(5) According to the old-established rules. the neck of the violin should be held by the lower first joint of the forefinger and the second joint of the thumb, in such fashion as to allow the tip of the first finger to extend above the neck of the violin. In consequence, the thumb ought to be placed against the side of the neck, opposite to the second finger, when the latter stops B-flat upon the G string. The space between fore­finger and thumb must be maintained and the hand proper must not touch the neck, the hand being held in such a hollow manner as to permit the tip of the bow being placed through the open­ing of the two loosely applied finger joints. The hand is not to be spread flatly, but the ball of the thumb is to protrude, giving an appearance Illustration No. II. Holding the Violin in a horizontal position with the aid of the Becker Chin and Shoulder Rest through light pressure of the chin. as though the hand were partly formed into a fist. (See illustrations VI, VIII, X, XII) The wrist and outside of the hand are to appear as though in a straight line as much as pos­sible. (See illustrations VI, VIII, X, XII)

(6) The fingers are to be bent in both joints, held lightly above the strings, and are to fall upon them like hammers. (See illustrations VI,VIII, etc.)

(7) The arm is to be held exactly before the breast and as near as possible beneath the centre of the violin; however, to facilitate the cor­rect placing of the fingers on the lower strings in the higher positions (starting with the fourth), it (the arm) should be moved still nearer toward the right side. (See illustration V)

Correct position of the hand and arm as seen from the right side. 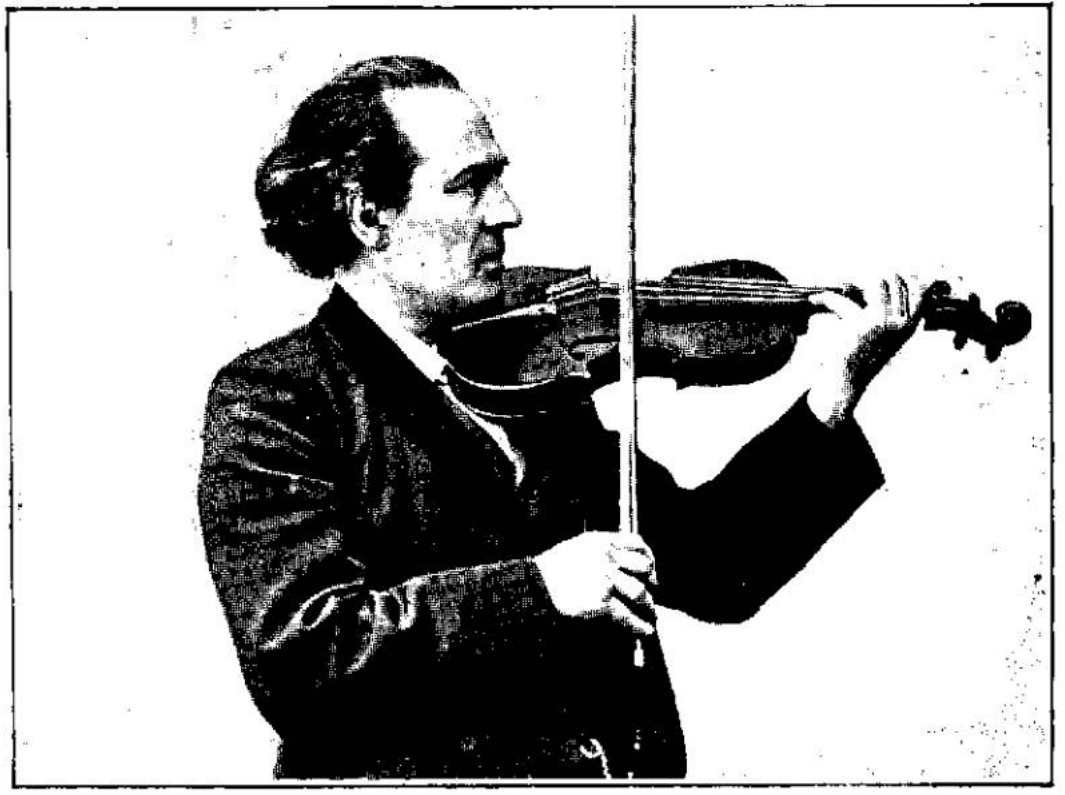 Correct position of the hand and arm as seen from the left side. The neck rests upon the second joint of the thumb. The tip of the latter does not point in an upward directions, but towards the peg-box. The point of the elbow must come under the right rib of the instrument, contrary to the teachings of the old school of having it directly beneath the center of the back. 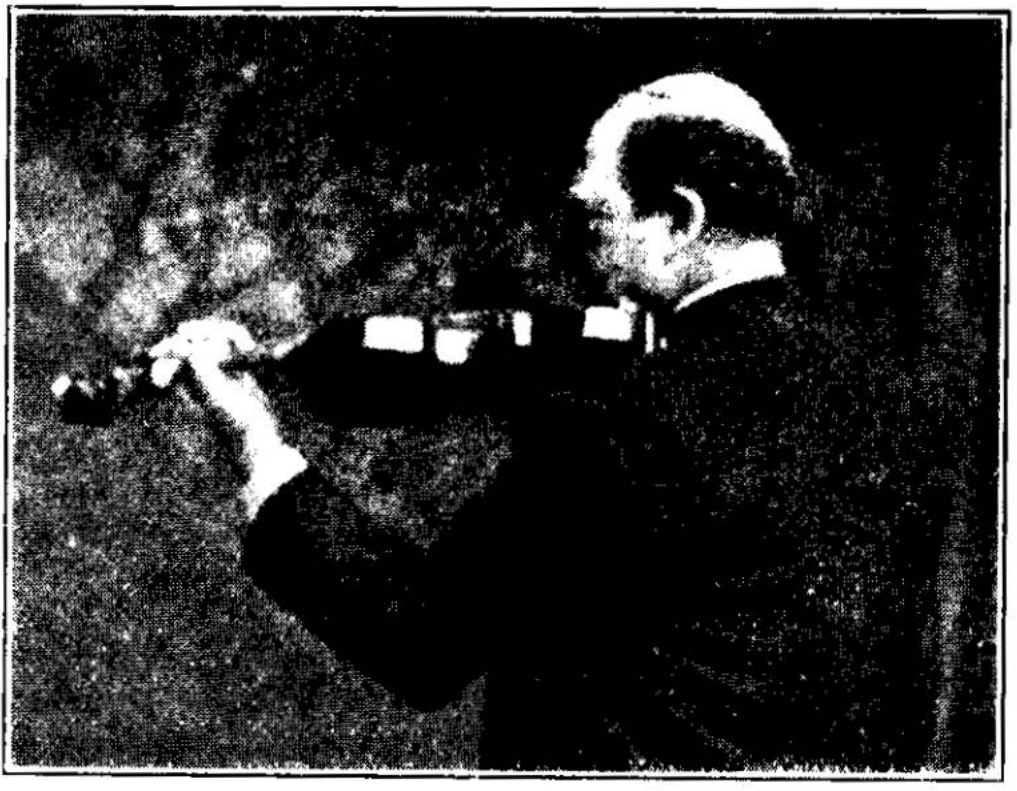 Paganini Caprice No.3 in E minor