Now, in order to prove that the [position discussed in the previous chapter] is not the most desirable, surest, nor the most prac­tical position of the hand and arm for attaining and mastering the highest possible virtuosity, will proceed to the discussion of the positions as employed by Paganini. To begin with, these consist in the following: The hand is placed in a more right angled position; this is brought about by drawing the hand itself more to the left, which, in turn, will bring that part of the hand which holds the ball of the little finger nearer to the fingerboard. The second joint of the thumb, however, should be withdrawn from the side of the neck; it should be placed rather below the latter, say where the curve of the neck toward the peg box begins. (See illustrations VII, IX, XL, XIII, XIV, XV.)

Correct position of the hand in the half-position, according to the author's modern principles and requirements. The neck rests upon the second joint of the thumb. The tip of the latter does not point in an upward direction, but toward the peg box. (The fingers are stopping A-flat, B-flat, C-flat, and D-flat). 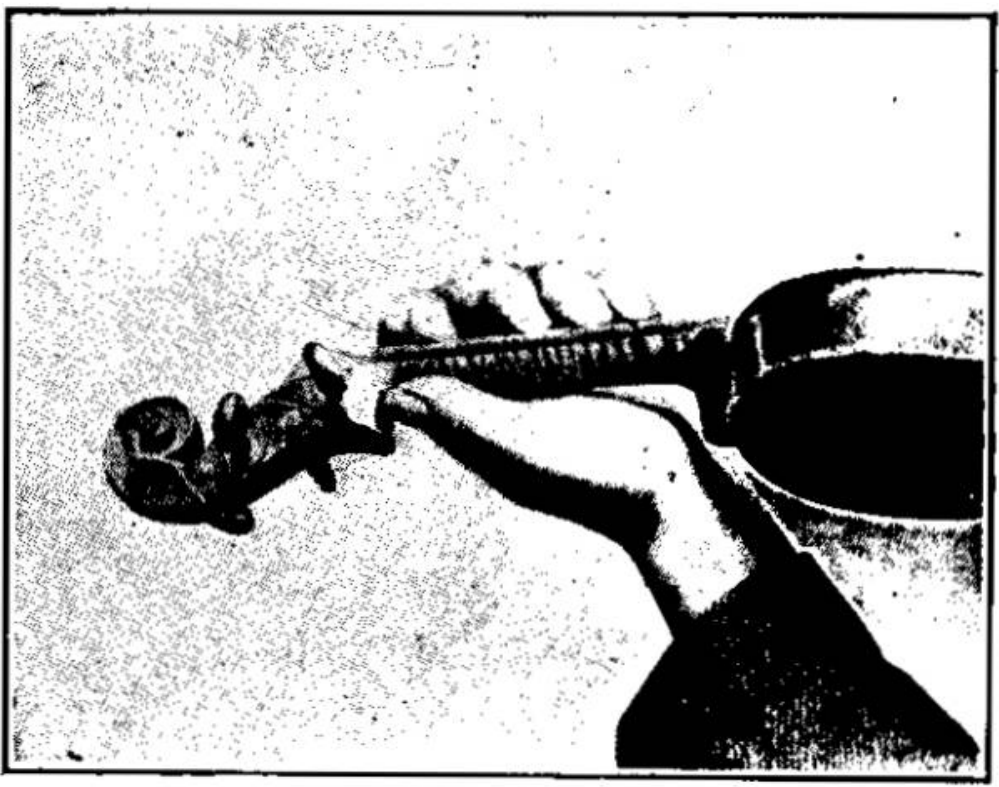 Therefore, the tip of this joint will not point in a straight upward position—as in the old and well-known method—but, to the contrary, toward the peg ­box. The first joint of the forefinger should not lean against the neck, but should be held at a distance therefrom. (See Illustrations IV, V.) Furthermore, attention must be paid, that in­stead of holding the elbow exactly beneath the middle of the instrument’s back, it should be pushed a great deal more toward the right side. This method of holding the elbow should be maintained not only in the higher positions, brutal so from the very first one on. (See Illustration V.) For the rest the rules of the old method for the holding of the arm and hand hold good. Consequently, with the new method, the violinists hold in just the same horizontal position as of old; the peg box comes directly opposite to the left shoulder, and the inclination of the violin toward the right side should amount to an angle of something like 45 degrees. (See Illustra­tions I, II, III, IV, V.)

Paganini Caprice No.5 in A minor