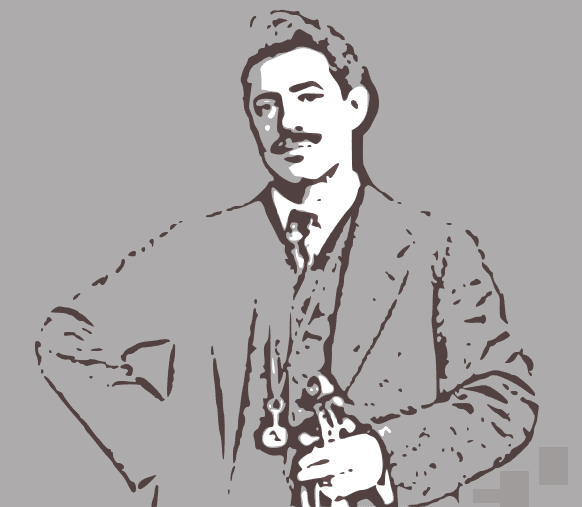 Fritz Kreisler was born in February of 1875 in Vienna, Austria. His father was an amateur musician who taught Kreisler from a young age. He was admitted to the Vienna Conservatory and began studying under Josef Hellmesberger (A dedicatee of a string quartet by Carl Goldmark) and Daniel François Esprit Auber. This was quite an accomplishment at such a young age considering that the institute usually accepted only older students (at least fourteen).

Kreisler later relocated to Paris and became the violin pupil of Lambert Massart and of Léo Delibes for music theory.

At twelve years old, It was not surprising to his pedagogues when he achieved the ‘Premier Grand Prix de Rome’ even against the odds of competing against much older students.

In the late 1880s, Kreisler traveled around the United States performing with his accompanist Moritz Rosenthal.

At some period in his life, Kreisler was fully invested in working as an officer and stopped practicing violin. He slowly transitioned back into public performances however and made his astonishing debut in March of 1899, in Berlin, performing Bruch’s violin concerto no.2 in D minor op.44, and Vieuxtemp’s violin concerto no.2 in F# (F sharp) minor as well as Paganini’s ‘Non Piu Mesta’ variations op.12 (which Kreisler arranged for violin and piano) with conductor Josef Rebicek and the Berlin Philharmonic. This music requires top mastery of the instrument.

Kreisler was found to have been performing his own pieces, while crediting them to other composers. He suggested that the violin repertoire was lacking, and preferred not to perform pieces only stating ‘by Fritz Kreisler’ as audiences would grow tired of it. Today, these pieces received subtitled indicating the composer Kreisler credited: ex: ‘In the style of Porpora’.

Many famous composers dedicated music to Kreisler. Honorable mentions include:

York Bown Suite for violin and piano in d minor, op.28 pub. 1909. This is a four-part composition for violin with piano accompaniment, that includes a beautiful Barcarolle [Barcarole] and Humoresque:

Rachmaninoff Sergei Variations on a theme of [by] Corelli in d minor, op.42 for piano solo. The theme happens to be Corelli’s Violin sonata no. 12 op.5, the celebrated ‘La Folia’,