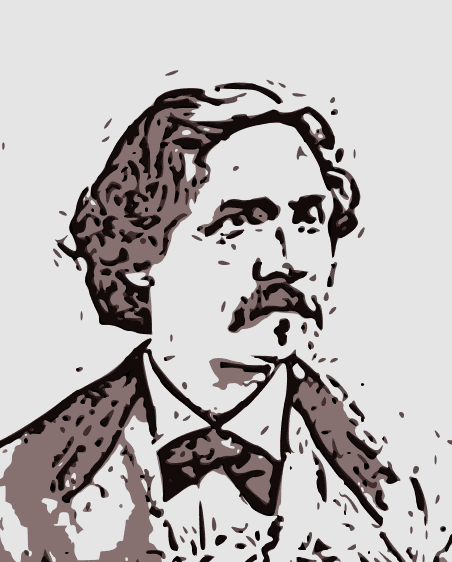 Edward (Eduard) Mollenhauer was born in April of 1827 in Erfurt, Saxony (Prussia). He had two brothers – both musicians, Frederick (Friedrich) a violinist, and Heinrich a cellist. Frederick as the eldest taught the two younger brothers music. With their father as the manager, the youngest was about nine years old when the three talents began giving many concert performances, which allowed them the opportunities to meet such great masters and musicians as Clara Schumann.

While in Berlin, after being impressed by his musical talent and skills, Wilhelm Heinrich Ernst accepted Edward as his student. He helped Eduard achieve virtuosity. This paved the way for Mollenhauer’s career and provided him the opportunity to meet such great composers as Louis Spohr, taught him in the 1840s, and spoke and wrote extremely highly of him as ‘one of the greatest violinists in the world’.

Edward was appointed as a director at the Hamburg opera house until he was called into mandatory military service. This brought him to escape to England where he continued his musical endeavors. Within his travels he befriended Henri Vieuxtemps. Mollenhauer toured in the United States in 1853 joining the orchestra of conductor Louis Antoine Julien (Jullien).

He found himself in New York where he composed operas and opened a successful music conservatory. He’d also been the solo violinist with the New York Philharmonic.

He often performed on both violin and viola with Henry (Henri) in concerts put together by his music school. Some of these can be found cited here:

Edward met some of the most well established composers and musicians of his time during his tours and travels. Most notable acquaintances were the Robert Schumann, Johann Nepomuk Hummel, Hector Berlioz, Jacques Offenbach, Ole Bull, and [Johann?] Strauss. According to one source, he’d also invented a piece of equipment titled ‘Arm-Guide’ for violin players.

The ‘Imperial Method for the Cello’. An educational book with a compilation of etudes, studies, and short pieces to advance the technical abilities of cellists. It contains a bevy of instructions and delineation of basic and advanced musical concepts.

There are exercises in arpeggios – teaching the performer to evenly distribute the bow over all of the strings with quick shifting of the fingers.

The study book contains position training, with etudes from first to the fourth position, and higher later in the book.

One can also learn and improve their clef reading with compositions that include treble, bass, and tenor clefs: https://imslp.org/wiki/Imperial_Method_for_the_Cello_(Mollenhauer%2C_Eduard)

An interesting technical practice is the ‘Sliding Trill’ on page 57.

The method book provides some popular music to solidify the newly learned concepts:

Gabriel Marie, ‘La Cinquantaine’ (The Golden Wedding) in A minor,

Friedrich August Kummer, ‘Cujus Animam’, also from the opus 142 No.20 based on Rossini’s Air from ‘Stabat Mater’.

Another piece from Kummer is Miserere from ‘Airs Celebres’ op.142 No.22 arrangement for cello and piano based on a theme from Verdi’s opera ‘Le Troubadour’. The piano score is rare.

Mollenhauer also produced a method book for the Double-bass: