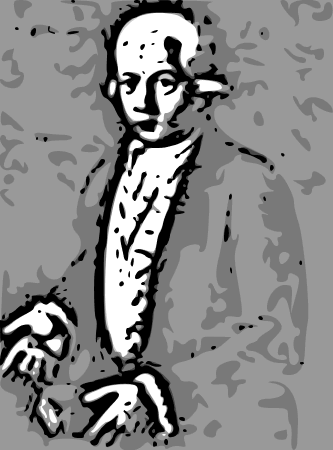 Joseph-Hector Fiocco, born in Brussels, Belgium early in the 18th century (probably 1703: some sources incorrectly placed his birth in 1690 and his death in 1752 or later), to a family of musicians including Pietro Antonio (his father – a conductor in a court ensemble) and Jean-Joseph (his brother), both composers. In the late 1720s he was ‘vice-maitre’ or sub-master of the Royal Chapel, but soon after, circa 1731, Joseph-Hector became the director at ‘chapelle de Notre-Dame d’Anvers’ (‘Cathedral of Our Lady‘), though he left this duty after a short period.

Joseph-Hector is argued to have been influenced by the styles of Couperin, and Hændel but also developed his own style.

Mr. Fiocco was well known for his keyboard and harpsichord playing abilities around 1737, and had written his most famous score for harpsichord – the Pieces de Clavecin with 24 parts. Additionally he had composed a ‘Missa Solemnis’, a kind of choral mass for five voices, two violins, alto-viola and organ accompaniment. Mr. Alfred Moffat included Fiocco’s ‘Deux Gavottes’ in his ‘12 Popular Pieces’ for violin and piano

where other excellent study pieces can be found, such as Bach’s Air in B minor, Hummel’s ‘valse’, and Telemann’s Rigaudon. He’d written multiple masses for which the manuscripts can be found in the archives of the Cathedral at Notre-Dame and Saint Walbruga in Antwerp, Belgium.

The Fiocco name carries quite a history with itself; Fiocco's father Antonio was respected as both a player and composer, mostly for dramatico-religious music. Antonio wrote prologues to operas by Jean-Baptiste Lully such as Acis et Galatee, Amadis, and Bellerophon.